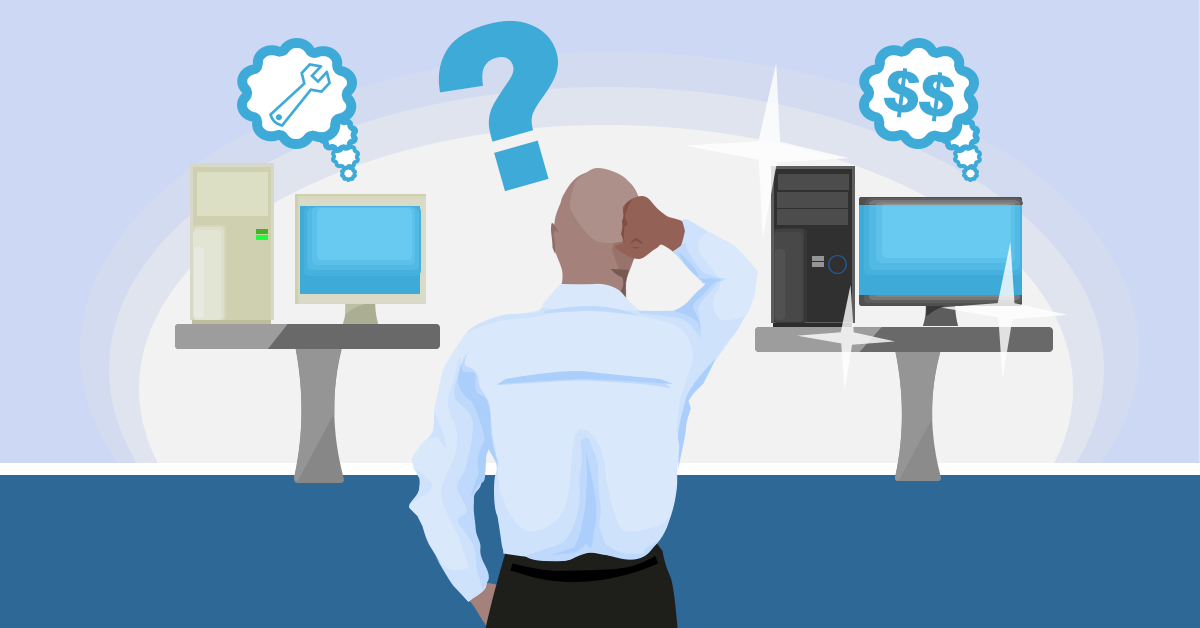 Should You Repair, Upgrade, or Replace Your Computer?

Like many valuable things we buy, new computers suffer from wear and tear over time. Our computers are particularly vulnerable as we have placed more and more demands on them every year. New machines have got faster, quieter, more reliable, and more capable over time. At the same time our own computers have begun to slow and sometimes even stop performing altogether.

There are many ways to address the problem of a PC which isn’t quite performing up to the task anymore. Whether frustratingly slow or no longer working; we are happy to take a look. When you bring your computer to us we will diagnose the condition and find a solution that works for you. Often times the simplest solution works best. A complex problem sometimes only needs a simple repair to get your home computer up and running like new again. Whether a small replacement part, loose wire, or bad connection; we will find and fix the problem to give your familiar, home machine a new lease of life.

Many computers come to us running slowly, taking a long time to start up, or freezing when trying to load files and programs. Often owners have reached breaking point and become convinced the machine is fit for only the scrap heap. In many cases, the problem can be pinpointed to a bottleneck in the system. A single, seemingly trivial, part can be holding up the entire system. Amazingly, upgrading just that one component can make the whole machine run like new again.

Adding memory can provide extra space for programs to run faster. Adding an updated, faster hard drive can allow files to be retrieved without delay. In both cases, a low-cost single component can provide a cost-effective solution that makes an old machine like new again.

In some cases, computers succumb to more major faults. A critical part, difficult to replace, may stop working altogether. A failure of the motherboard for example, the backbone that all other components connect to can be expensive, if not impossible, to fix. Typically, with the fast-paced and ever-changing nature of computing, a motherboard will only house computer parts that were manufactured around a similar time.

A motherboard is almost certain to be incompatible with components built just a couple of years before or after its own design for example. Occasionally even a motherboard failure can be resolved too. In these cases we strive, whenever possible, to find a replacement board of the same generation that will work alongside existing components. The result is a cost-effective solution that keeps cost down by saving replacement parts.

In cases where a like-for-like replacement motherboard is not available, many parts of the computer may have to be replaced at the same time. Often replacement costs in these cases can get close to, or even exceed the cost of buying a new machine.

We would always give advice where it makes sense financially and practically to consider replacing an old machine. Often, in this respect, a home PC can be considered a little like a car. Sometimes a simple, non-expensive, easy to replace component such as the window wiper can fail. While a crucial part to be used for driving; it would be silly to suggest replacing the vehicle once it has worn out.

A window wiper may be low-cost and simple to replace, but if the engine were to wear down or break the solution may not be quite as simple. Attempting to make a 30-year-old car as fast, safe, and reliable as a brand new model generally doesn’t make any financial or practical sense. Sometimes the best course of action to save money and avoid breakdowns is a more up to date vehicle.

In computing, many of the same rules hold true. The best solution in each case is always tailored personally to fit you and your own computer.

Bring your machine in to us or give us a call us at (219) 325-9734 to discuss your computer issues. We’ll keep you informed about your machine and advise on the best course of action to get you up and running as quickly as possible.

This website uses cookies to improve your experience while you navigate through the website. Out of these, the cookies that are categorized as necessary are stored on your browser as they are essential for the working of basic functionalities of the website. We also use third-party cookies that help us analyze and understand how you use this website. These cookies will be stored in your browser only with your consent. You also have the option to opt-out of these cookies. But opting out of some of these cookies may affect your browsing experience.
Necessary Always Enabled
Necessary cookies are absolutely essential for the website to function properly. This category only includes cookies that ensures basic functionalities and security features of the website. These cookies do not store any personal information.
Non-necessary
Any cookies that may not be particularly necessary for the website to function and is used specifically to collect user personal data via analytics, ads, other embedded contents are termed as non-necessary cookies. It is mandatory to procure user consent prior to running these cookies on your website.
SAVE & ACCEPT